Preeti, 20, a resident of India’s Bijapur village in Uttar Pradesh’s Jalaun district, must combat more challenges than COVID-19. The first female Dalit (member of the Scheduled Caste, formerly known as “untouchables” [1]) in her village to be enrolled in an undergraduate program, Preeti is anxiously waiting for the government to release the final tranche of her college scholarship. If it fails to do so, Preeti, who is in her final year of a Bachelor of Science program, will be forced to drop out. She is solely dependent on the scholarship to complete her college education.

The National Campaign on Dalit Human Rights (NCDHR), IBP’s partner in India, long has focused on the inequities faced by people like Preeti and has redoubled its work as the ravages of COVID-19 become apparent–including bolstering youth leadership. On March 24, the government of India announced a country-wide lockdown to check the spread of the virus [2]. Since then, all academic institutions in the country have been closed. Along with the pressures of the pandemic, the future prospects of Dalit students dependent on the scholarship scheme has been disproportionately affected—jeopardizing the chances of Preeti and others like her for a path out of poverty and marginalization.

“It is demoralizing and disempowering for those of us pursuing our PhD/graduate courses if we have to drop out of college and are forced to work as daily wage laborers in the unorganized sector. Our future depends on the timely release of the scholarship [funds],” says Preeti.

The All India Survey on Higher Education for 2018-2019 reports that Dalits account for only 14.9% of the 37.4 million students enrolled in higher education. Most of these students are first generation-learners with no financial resources or social capital. Even those who make it into college face backlash from members of “dominant” castes, as historically, for over 3000 years, education was denied to Dalits. The marginalization multiplies for Dalit women, who are at the bottom of caste, gender and class hierarchies and most often have no agency or support to overcome these systemic barriers.

Recognizing the institutional discrimination faced by Dalit students, NCDHR is heavily investing in strengthening the collective agency and leadership skills of these students. The core of this intervention is the training and support of a group of student volunteers. In the Jalaun district, there are 30 student volunteers, 40% of whom are girls. They are the driving force of NCDHR’s efforts and Preeti has been volunteering for the last three years.

Despite the troubles Preeti herself faces during the lockdown, she has helped ease its strains on her community. For instance, many Dalits had travelled to cities across India for work, but have been forced to return to their villages. Among the states, Uttar Pradesh is one of the most challenged, with about 2.1 million migrants flooding home. With no food, money or assured mode of transport, migrants made the long trek by foot. The media have reported about 300 deaths by starvation across the country since the lockdown; however, this might be a conservative estimate. The World Bank estimates the lockdown has already impacted 40 million such internal migrants and the International Labor Organization cautions that 10 times this number (400 million) are at risk of falling deeper into poverty.

As many as 85 Dalit migrant families made their way back to Bijapur, who then were ostracized by the dominant castes, who did not allow them to enter the village. Another challenge is that the World Health Organization’s recommendation to practice social distancing collides with India’s caste system. Social distancing is traditionally a Brahminical diktat that sanctions the practice of “untouchability” and normalizes discrimination and violence against Dalits [3].

Preeti was quick to take initiative by interviewing migrants and creating a database of their immediate needs, including testing for COVID-19. She led a delegation of six student volunteers and advocated with the Pradhan of the Gram Panchayat (head of the village council), the sub-divisional magistrate and doctors in the primary health centre to provide immediate relief to the migrants. Preeti was persistent and followed up several times. As a result, health camps were organized, dry rations were distributed and shelter was provided in a government school for migrants who required 14 days of quarantine. 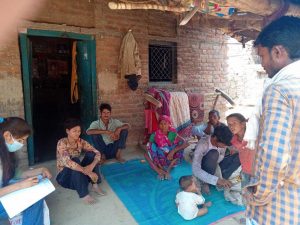 The village of Bijapur is home to 1,300 inhabitants, most of whom are Dalit laborers living below the poverty line (less than INR 26 [$0.43] a day). Nearly half the families do not have access to the subsidized dry rations provided to all poor families through the government’s Public Distribution System. Preeti and other student volunteers carried out a door-to-door survey to assess the number of families without the necessary documentation to receive the government COVID-19 relief packages. The volunteers shared the survey findings with authorities in the district administration.

Along with NCDHR’s local partner, Bundelkhand Dalit Adhikar Manch (BDAM), the student volunteers advocated with the district for immediate relief, as well as demanded that these poor households be employed as part of MGNREGA (Mahatma Gandhi National Rural Employment Guarantee Act), thus providing some respite. The act ensures 100 days of minimum-wage employment every year for recipients. Due to the volunteers’ consistent engagement, relief measures were provided to the poorest families and MGNREGA work started again in their villages.

Preeti spearheaded the relief work in her village, Bijapur. Through her efforts, 50 families received dry rations and 15 senior citizens gained access to the government’s pension scheme. Preeti applied for MGNREGA job cards for over 100 families, of whom 87 were successful. Also, as the leader of BDAM’s women’s wing, Preeti raised awareness of the lack of access to sanitary napkins for adolescent girls. BDAM subsequently raised resources from a partner organization to provide these products to 150 girls across three villages in Jalaun district.

Even as Preeti inspires with her dynamism, she continues to struggle to pursue her education. Due to the pandemic, academic institutions have shifted to digital modes of learning. Virtual lectures, online assignments, webinars and discussions are organized. However, in the absence of equitable access to digital infrastructure [4], including internet service, laptops and smartphones, students from poor and marginalized communities face extraordinary challenges. In light of this, Preeti and other student volunteers met the social welfare officer who implements the scholarship at the district level. The officer was receptive to their demand that the government provide basic digital infrastructure for Dalit students, but has yet to take necessary action. The students are afraid that if academic institutions continue providing classes online, it will push them out of the education system.

Nonetheless, despite facing multiple barriers, Preeti and other student volunteers are pushing social boundaries and bringing about transformational change in their communities. Their association with NCDHR, BDAM and a larger community of student volunteers gives them the strength and resilience to navigate caste and patriarchy in their everyday lives.

“People here are not used to women raising their voices and engaging with the government to influence developmental outcomes. However, due to my efforts during the pandemic, people in the village who were earlier dismissive of my work now respect and look up to me as a leader,” explains Preeti.

This reflects the gradual shift in power equations and socially accepted norms, especially regarding girls’ agency, education and leadership. The emerging social capital of women student leaders has the potential to change the status quo, but it must be nurtured and leveraged to encourage greater democratic participation, paving the way for inclusive and responsive governance at the grassroots.

[1] The caste system is based on degrees of “purity” and “impurity,” with the Brahmins at the top being the “purest” and the Dalits at the bottom perceived as “polluted”—therefore making them “untouchable.”

[2] India ranks at the top in terms of stringency of government responses among 160 countries in an index developed by the Blavatnik School of Government at the University of Oxford.

[3] India’s caste system is the world’s longest-surviving social hierarchy, with Brahmins at the top and Scheduled Castes (including Dalits) at the bottom. The caste system sanctions discrimination and exclusion from sociocultural, economic and political life.

[4] According to the 2017-18 National Sample Survey Report on Education, only 15% of rural and 42% of urban households have access to the internet. This points to a huge urban-rural divide in addition to gender, caste and class inequalities.