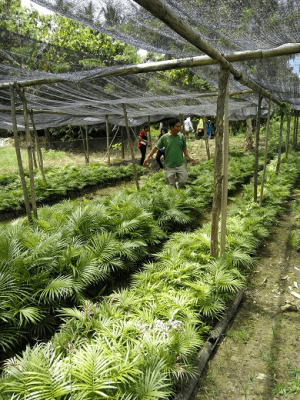 The agriculture, forestry, plantation, and marine fisheries sectors provide livelihoods for a significant fraction of the Indonesian population, yet contribute less than one out of every ten dollars of revenue received by the provincial and the national governments. In many resource-rich regions, poverty rates are high and local residents receive little or no benefit from the exploitation of the country’s abundant natural wealth. Two Indonesian civil society organizations – Perkumpalan Inisiatif and Seknas FITRA – hypothesized that weak administration and corruption contributed to weak revenue collections and designed an ambitious research project to test this hypothesis and develop recommendations for improving revenue collections and resource management.

While both Inisiatif and FITRA brought a strong background in spending-side budget analysis to the table, this effort was the first by each organization to address the revenue side of public budgets. The basic analytic approach – review of public documents, budgets, laws, and data sources – largely drew on the same skills used in budget analysis. But the project differed from traditional budget analysis in its focus on potentially sensitive subject matter – corruption – and its reliance on key informant interviews. The focus on non-extractive natural resources also distinguished this project from prior efforts in Indonesia and in other resource-rich countries.

With support from the International Budget Partnership, project organizers developed a three-step plan designed to build the knowledge base and support needed for future advocacy efforts. The first phase of this project focused on four non-extractive natural resource sectors – forestry, agriculture, plantations, and marine fisheries – and involved:

The project relied on extensive field work – “revenue sniffing” – conducted by members, staff, and leaders of the two organizations. The sniffing process deployed detailed interview protocols tailored for each sector, designed to identify evidence of tax evasion, permitting violations, or other forms of corruption and mismanagement. Field researchers interviewed a range of actors including government officials, workers, and others that might have knowledge of practices affecting revenue collections. The field interviews also sought to inform the development of recommendations for improving revenue collections and resource management. Perhaps more importantly, the revenue sniffing process was also key to the project’s advocacy strategy and was designed to prepare the field researchers to become leaders in subsequent advocacy activities.

The problems identified by the research were largely consistent across the four focus sectors. Each of the sectors suffered from a general lack of transparency and accountability. Permit and licensing processes were complicated, which created opportunities for corruption and made it difficult for legitimate businesses to operate. Revenue administration was weak, leading to poor compliance and opening the door to corruption. Affected communities understood that they often did not benefit from the exploitation of natural resources, but lacked the knowledge on how to respond in a manner that could achieve results. The lack of comprehensive and consistent data contributed to inadequate oversight and poor compliance. Researchers concluded that improved governance would present a “win-win” opportunity for increasing revenues and improving the plight of local residents that depend on natural resources for their livelihoods.

Even for two experienced organizations to tackle together, this project was large and complicated. The scale, scope, and innovative focus of the project generated a number of “lessons learned.” Among the most important are:

For Inisiatif and FITRA, the project was largely a success. The two organizations’ history of collaboration established the trust needed to respond to unanticipated challenges. As problems or foreseen issues arose, the project team learned to “slow down a little, discuss, and learn.” Working together, they developed a compelling body of evidence documenting systematic problems that prevent the full realization of state revenues from four key sectors in the Indonesian economy, recommended solutions for improving revenue generation and governance, and engaged key stakeholders to increase awareness of the importance of these issues and help ensure that governments have the resources they need to support public services and develop policies that advance the well-being of citizens and communities.