Why Reasons are Fundamental in Government Budgets

Including reasons for deviations during budget implementation is not a radical idea. Mainstream public finance assessments already ask whether governments provide explanations for deviations from plans and budgets, and many governments around the world already provide explanations for failing to implement their budgets. The countries that provide at least some explanations for variations between their planned budget and actual spending are spectacularly diverse – Afghanistan, Chile, Costa Rica, Dominican Republic, Jordan, New Zealand, Nicaragua, Philippines, South Africa, and the United Kingdom – which suggests a fairly widespread acceptance of providing some kind of public justification for budget deviations.

So how can we judge the quality of the explanations that governments provide? In some cases, the “explanations” provided in government documents may not even meet the minimum condition for an explanation. Suppose that a government makes the following statement about revenues: “the reason that total revenue declined last year is because VAT collections underperformed.”

This may appear to be a causal statement (it uses the word “because”), but in reality it only provides further details about the problem that in turn requires explanation: why did VAT decline?

Once a government has made a causal statement to explain a fact or action, members of the public and their representatives should evaluate it. But at the global level, there are no recognized standards for assessing the reasons governments provide. This means that providing something that looks vaguely like an explanation, even if it does not actually explain much and fails to facilitate further conversation about the budget, is okay.

Our new paper, “Assessing the Quality of Reasons in Government Budget Documents,” proposes five criteria (including the need for a causal statement) that we think define the adequacy of a public reason for a government action. We look at this question for both prospective reasons (e.g., proposed choices in the budget) and retrospective explanations (reasons for facts or actions in the past, such as a failure to spend the budget). In the paper, we offer a preliminary test of these criteria by reviewing budget documents in the United Kingdom and South Africa.

Download the paper to see the criteria we use. What do you think? Are these criteria adequate? Is there something missing? Can you think of an example of a government justification to which you could apply these? We want to hear your thoughts! Comment below or email [email protected]. 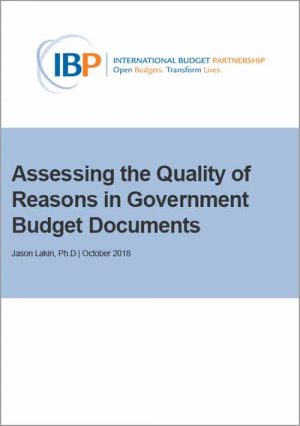