What Has the Open Budget Survey Taught Us About Progress and Challenges to Improving Budget Transparency?

An essay from the International Budget Partnership’s 2015 Annual Report

A core goal of the International Budget Partnership is to encourage governments to make budget information available to the public so that civil society can participate effectively in all aspects of the budget process. The Open Budget Survey (OBS) is the main tool that IBP uses to assess progress in this area, encourage change, and identify challenges.

The OBS 2015 finds that budget transparency has improved modestly over time, particularly for countries that were ranked among the least transparent in previous rounds of the survey. Of the 102 countries covered in the 2015 survey, the average score on the Open Budget Index (OBI) was 45 out of a possible 100. Between 2012 and 2015, for the 100 countries covered in both surveys, the average OBI score increased by 3 points. But among the 41 countries considered weak performers in 2012 (with OBI scores of 40 or less), the average score increased by 10 points in 2015, and by 20 points or more for 11 of these countries.

While these findings correspond with those of earlier surveys, the 2015 results also expose the fact that relatively few countries have improved to the point where they are publishing sufficient information to enable CSOs, oversight institutions, and members of the public to participate effectively in the budget process.

In terms of the OBI, providing a sufficient level of information means scoring above 60 out of 100. This is not an arbitrary target. Most of the survey questions require researchers to score countries based on whether they follow best practice, good practice, or some lesser metric, when providing information to the public. To achieve a score of more than 60 on the OBI, a country would need to meet good practice standards on most of the 109 indicators in the survey that are used to calculate the OBI. Therefore a score of 60 requires countries to meet basic, but not exceptional, standards. 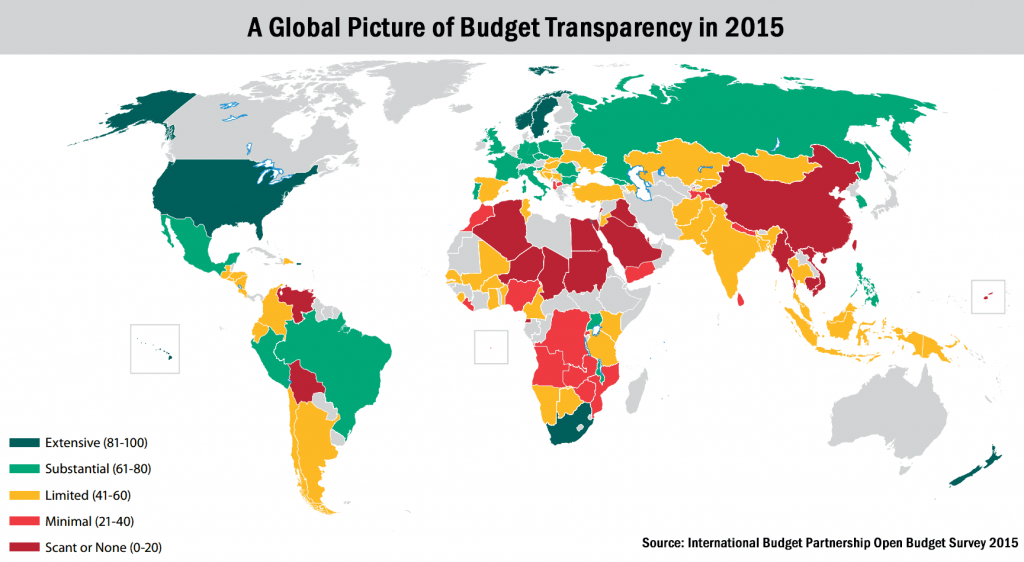 A global picture of budget transparency in 2015. Click to enlarge »

Compounding this problem, a significant group of countries in the survey seems to have become stuck in the 41 to 60 range. Fourteen countries with scores between 41 and 60 in 2015 have been stuck in this middle range since they joined the survey, including 11 countries that have been part of the survey since its first round in 2006. This includes Argentina, Columbia, Croatia, Ghana, Jordan, Kenya, and Tanzania; all members of the Open Government Partnership, and often touted as transparency improvers.

Having identified this problem, a critical question for IBP going forward is: why do countries have trouble moving above the 60-point threshold, from insufficient to sufficient information?

One possibility is that countries face political constraints. Improving budget transparency requires political will; if such will is limited, then it may be enough to allow some improvements but not enough to move a country to a level of budget transparency that meets international standards. Another possibility could be technical and capacity constraints. In many cases meaningful improvements in transparency involve more than publishing new documents, requiring a government to go beyond merely releasing to the public information that it had already been collecting. Enhancing the level and variety of detail included in published documents — for instance, quantifying tax expenditures or developing multiyear frameworks — can be more challenging, often requiring new systems and processes.

Yet another possibility for some countries is that the external incentives for improving transparency decrease significantly once a country provides more than minimum levels of budget transparency. Gains in transparency have often been catalyzed by fiscal crises and the transparency requirements of foreign investors and rating agencies. But the demands of these institutions are unlikely to extend to the more detailed data a country needs to provide for effective civil society engagement. Similarly, the transparency yardsticks used by international donors to condition aid flows tend to focus on minimum standards; donor attention tends to wane as countries surpass these measures. And, while the media or CSOs may find low OBI scores useful for shaming countries languishing at the bottom of the survey into action, that spotlight dims by the time a country ranks in the middle of the survey.

IBP recently examined these issues by conducting research to identify why some countries are able to raise their OBI scores above 60, and why others are only capable of more limited improvements. See our new publication The Road to 61: Achieving Sufficient Levels of Budget Transparency to learn more about our findings.

As a next step, we will partner with governments and researchers in the identified countries to dig more deeply into the political circumstances that propelled or limited progress. We will include countries that have succeeded in achieving scores over 60 in the past few years, as well as countries that have expressed interest in providing sufficient information for citizen engagement.

We will also seek to learn what domestic actors have done to continue to demand greater budget transparency from their governments, even after some progress has been achieved. And the roles that external actors have played in working with governments and coordinating with domestic actors to provide the financial and technical resources needed to support further advances in transparency. All of this work will be geared toward the key goal of moving countries up to the next level — to providing sufficient information so that citizens and civil society can participate in budget processes and hold their government to account.