This post was written by Michael Castro, Program Officer for the Open Budget Initiative at the International Budget Partnership.

On 18-19 July in Santo Domingo, Dominican Republic, the International Budget Partnership (IBP), the government of the Dominican Republic, and the Inter-American Development Bank convened government officials and civil society representatives for “Opening Public Budgets in Latin America and the Caribbean,” a regional event to release the Open Budget Survey 2012 and explore how “Open Government” can improve governance. Participants discussed how governments in the region had improved budget transparency, identified opportunities for increasing public participation in budget processes, and debated how to improve accountability mechanisms and how to make public spending more effective. Officials from the Ministries of Finance of Bolivia, Chile, Dominican Republic, El Salvador, Guatemala, Honduras, Mexico, and Peru were present, along with the IBP’s Open Budget Survey civil society researchers from these countries and a few others, including Argentina, Colombia, Ecuador, Nicaragua, and Venezuela. 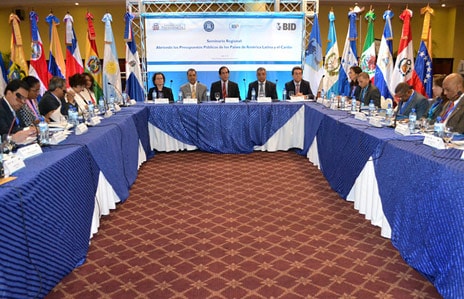 Discussions were lively, as participants delved into such issues as:

Budget transparency in the region varies, with some countries scoring relatively well on the 2012 Open Budget Index — such as Chile with a score of 66 out of a possible 100 (average OBI 2012 score is 44) — while other countries have room for major improvement for increasing their scores. In some countries in the region, there is little to no civil society involvement with the Ministry of Finance or meaningful spaces for public participation throughout the budget process. However, windows of opportunity are opening up. During discussions at the event, participating governments acknowledged the importance of improving budget disclosures in line with international good practices.

ments and civil society to identify how to improve OBI scores, create meaningful spaces for public participation, and improve accountability reforms in their respective countries.

The result was that the government representatives from all eight countries attending provided clear commitments to improving budget transparency by publishing documents that historically have been produced for internal use only.  Specifically:

The fact that the participating governments were able to make these commitments highlights the importance of political will to improve budget transparency.

While there is still a lot of work to be done, and it remains to be seen if the governments will follow through on their commitments, events like this one demonstrate that it is possible to bring together governments and civil society not as antagonists, but as potential allies for better governance, more efficient outcomes, and more open and responsive budgets.