This post was written by Jacob Bathanti, an independent writer and consultant. He blogs on open government and global politics at Obscure Suddha.

When I last wrote about Lima’s participatory budgeting (PB) initiatives, the city government had just introduced consulta virtual, using online voting platforms to expand participation in voting on public projects. Though only 17,000 of 6.3 million eligible voters used the platforms, it was still seen as a significant step forward, being the first online consultation of its kind in Peru’s decade-old participatory budgeting scheme.

In July another consulta virtual was held for Cercado de Lima (the city center). This time, over 13,000 of just over eligible 300,000 residents voted. With only a month separating the two consultas, this represents an impressive jump in the percentage of citizens exercising their right to participate in the PB process.

A few factors likely explain the difference. The relatively small size of Cercado de Lima probably allowed for a more intensive campaign to promote the consulta virtual. Additionally, the month that passed since the previous citywide effort gave the mayor’s office extra time to promote the consulta. Greater youth participation, a key focus of the reforms, also juiced the numbers. The citywide citizen consultation allowed everyone 14 and older to vote (Peru’s voting age is 18, so this is an unusual step). This consulta also included a concerted effort to encourage voting among secondary school students, setting up voting centers in 28 educational facilities, which resulted in almost 4,800 votes. 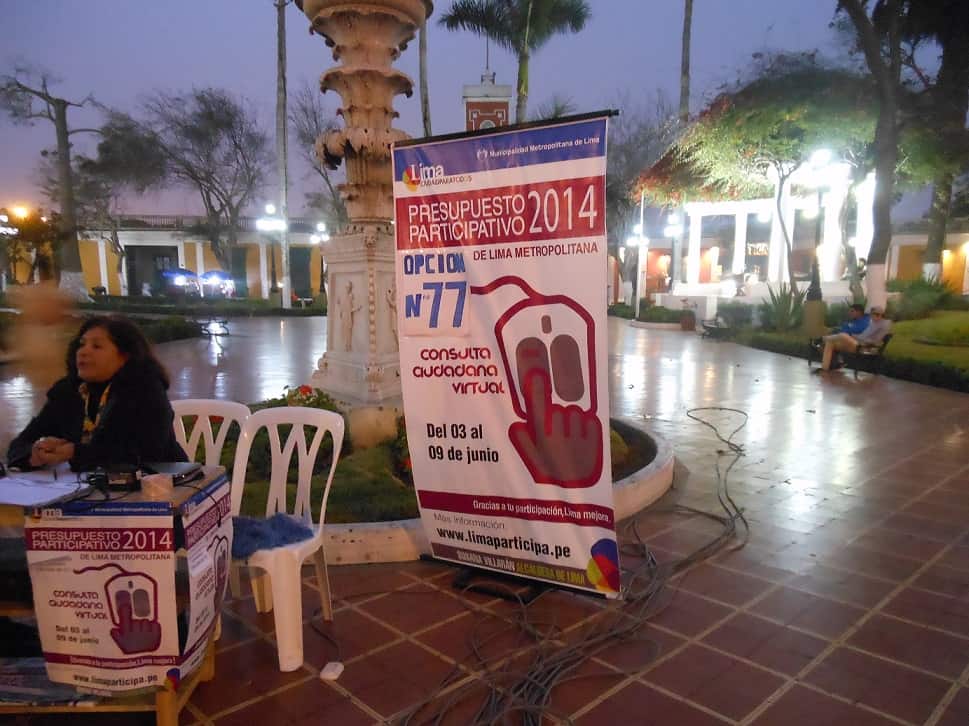 Meanwhile, projects approved in the PB process are moving toward the implementation phase. I recently caught up with Vilma, a long-time advocate for transparency and citizen participation whom I introduced in my earlier post, to talk about which projects made the cut, and steps forward for those that did.

When I first met Vilma months ago, she was standing in an early winter fog with a group of fellow activists and government employees. Engaging and friendly despite the gray weather, her little group handed out stickers and urged passers-by to vote. In particular, they were advocating for their favored project: a center for at-risk youths on the border of Barranco and two marginal neighborhoods, Chorillos and Surquillo.  Now, it seems their advocacy will bear fruit: the youth center placed seventh on the list of projects to be funded. Vilma credits strong involvement from the local and municipal government, as well as the broad appeal of the project, with the success of the campaign.

Obstacles remain. In Barranco, for example, the municipal government still needs to secure a land title in order to build the youth center — no easy task in a country characterized by widespread informality in land ownership and delays in issuing deeds. And there’s the more general problem of convincing people to participate in new, unfamiliar institutions, and persuading officials to cede some power to people who want to participate.

“If people trust in the municipal authorities [to carry out these projects], they will continue to participate,” says Vilma. “What worries me is a lack of interest in participating on the part of the population. But the greater blame falls on local authorities when they do not fully open participatory spaces for citizens to exercise their rights. We need to not fear these proposals — it is for the best if our neighbors see projects implemented that they themselves have proposed.”

Barranco is one case study of the larger processes occurring in Lima, and the reforms in Lima are one step toward expanding participatory spaces in Peru’s budget processes. It will continue to be vital for municipal authorities, to continue to support it. And local activists will need to continue to publicize and defend this extension of citizens’ rights to participate in the budget process.

Read additional reporting and reflections on Lima’s participatory budget reforms and the view from Barranco at Jacob’s blog Obscure Suddha.