Lessons and Insights for Citizen-led Accountability

This post was originally published on the Politics, Governance and Development blog.

As I discussed in a previous blog, SPARK is a new IBP program that will support and leverage public engagement around service delivery issues that affect citizens’ lives as an entry point to shaping budget processes and outcomes in the directions of justice, inclusiveness and democracy.  One of the key elements of SPARK is an embedded action research program led by Institute of Development Studies along with the Accountability Research Center, called Learning with SPARK (LwS).  The LwS core team involves key thought leaders in the fields of accountability, citizen engagement, power analysis and public financial management.  As we began a strategy development processes in SPARK countries, we wanted to open up a space to bring the ideas and evidence from the broader field into dialogue with the on-the-ground realities of our country teams.  In order to do this, we set up four webinars on topics related to SPARK, each led by one of the experts from LwS (with links to recorded webinars):

The content of each of these webinars was too rich to fully summarize in a blog, so I encourage you to view the webinars themselves.  Taken together the four webinars give a concise, but comprehensive, overview of thinking on how citizens engage the state for meaningful change with respect to public resources and services.

A few useful reminders that stuck out in my mind were:

Overall, I think the messages from these four webinars fit into four categories:

Citizen and civil society engagement with the state takes place in a multi-level, multi-layered system.  Alta Folscher reminded us of the complexity of the PFM system, in which many processes and actors link together.  This means bottlenecks or other challenges can occur throughout the system, as her illustrative diagram below suggests. 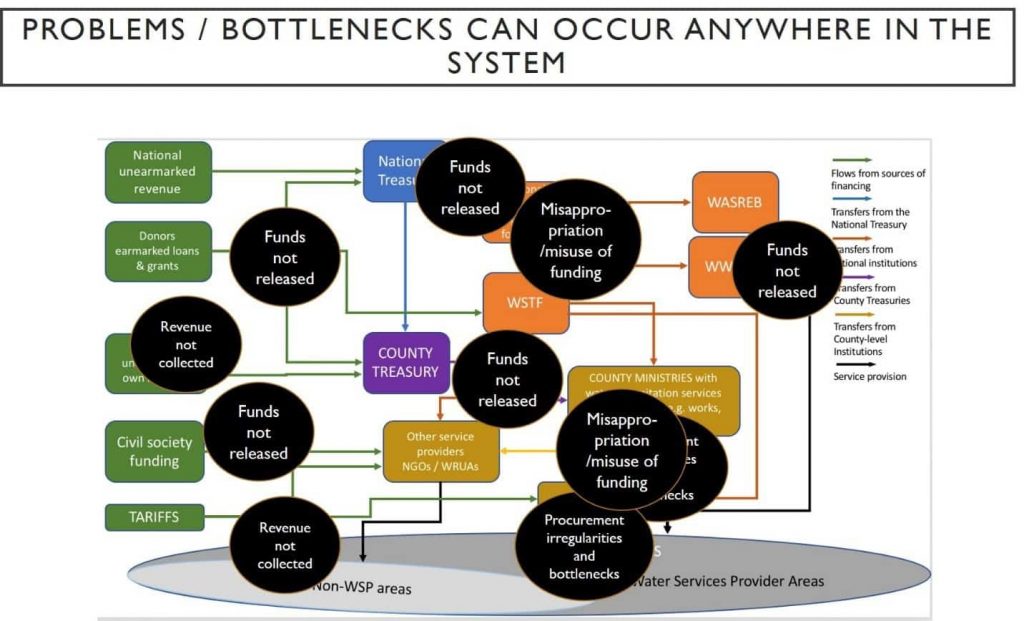 Alta reinforced the fact that this formal PFM system is embedded in a broader context in which political economic, social, and other factors influence how the system works in practice.  Similarly, Rosie McGee emphasized that the spaces for citizen engagement can be more or less formal, and exist at differing levels of governance.  Engagement in any one space may be insufficient to result in meaningful outcomes, particularly for less powerful actors.  Jonathan Fox proposed approaches to taking scale into account that come from a systems perspective, emphasizing engaging strategically at various points in the system to target the causes (not just symptoms) of corruption, exclusion and inequity.

Each of the webinars emphasized the importance of power dynamics.  Formal PFM processes and citizen engagement mechanisms exist in contexts of unbalanced power relationships, which work to exclude some groups and favor others.  Power shapes whether and how citizens organize, and often citizens need to build up collective power to then engage with the state on a more level playing field.  Power is both tangible – holders of political and economic power who can shape decisions and action to their advantage – and intangible – ideas that go viral and open up new possibilities or the subtle ways that language shapes our perceptions.  When we take power into account in our support for inclusive and equitable fiscal governance systems, this may lead us to working more indirectly to build up the kinds of power (including the power of ideas or discourses that can shape behavior) that allow citizens and government reformers to act in meaningful ways, rather that more directly to push through technically-sound changes that will undermined by unequal power arrangements.

Alta Folscher reinforced the idea that technically sound PFM systems are necessary, but not sufficient to achieve effective and equitable service delivery; effective accountability is equally important.  John Gaventa discussed that from the 100 case studies of citizen engagement he reviewed, collective citizen action through associations and movements that engaged in multiple spaces (formal and informal), were most effective at achieving real accountability gains.  This dovetails with Jonathan Fox’s ideas about pursuing multi-level, multi-actor strategies that are vertically integrated across levels of governance in order to monitor and engage in multiple links of the accountability chain.  This can involve professional NGOs, but also needs to connect to a broader civic base if it is to have the legitimacy and influence to challenge the causes and not just the symptoms of low accountability, i.e. those actors and institutions that undermine and resist accountability towards the public.

So far, this all sounds complicated and challenging – which it is – so how does meaningful change happen?  Obviously, we don’t have any magic formulas, but the consensus from these four discussions is that change can and does happen in small but important ways, and that thinking about power and systems can help us understand what kinds of changes can be linked up to have a more meaningful impact.  This is a key question that IBP and our partners wrestle with, that of ensuring that we are pursuing realistic incremental change, but doing so in a way that ensures that the whole is greater than the sum of its parts.  That was Alta’s point in looking at the necessary entry points to ensure accountability in PFM systems, Rosie’s argument about shifting power in diverse spaces of citizen engagement, John’s evidence about the kinds of civic mobilization that make a difference, and Jonathan’s point about thinking about scale as linking efforts strategically across governance systems.  This is certainly much easier said than done, but it actually gives us a set of strategic principles that could guide our work going forward:

Head of Strategy and Learning

Brendan Halloran is International Budget Partnership’s Head of Strategy and Learning. In this role, Brendan facilitates strategy and learning processes at IBP – both the internal production of learning insights and drawing on evidence and ideas from broader research and practice in the governance space. He’s particularly interested in complex change dynamics, and how to support organizations to both navigate and strengthen their accountability ecosystems.

Prior to joining IBP in 2016, Brendan lead the learning work of the Transparency and Accountability Initiative, where he played a role in shaping and interpreting evidence about what works, as well as supporting collective learning spaces, such as the TALEARN network. Before that, Brendan spent five years living, researching and working in Guatemala, most recently as a Governance Advisor for USAID.  Brendan has a Ph.D. from Virginia Tech, and has published work in a variety of journals, think pieces, and blogs, including his own — Politics, Governance, and Development.