It Takes a Village: Lessons Learned from Citizen Budget Engagement in Kyrgyzstan

This blog post is by Jyldyz T. Kasymova, Assistant Professor at the Political Science Department, Buffalo State (SUNY) and Professor Hindy L. Schachter, Professor at the School of Management, New Jersey Institute of Technology.  It is excerpted from their recent article “Bringing Participatory Tools to a Different Level: a Case Study of Local Participatory Practices in Kyrgyzstan.”

Engaging citizens in budget decision making is increasingly recognized as an important function of governments around the world. Many western-financed NGOs (nongovernmental organizations) are encouraging citizen participation when states transition from authoritarian to democratic governments, as is the case with Kyrgyzstan. After its independence in 1991, Kyrgyzstan adopted several legal tools for budget transparency, including the Law on Basic Principles of Budgetary Law in the Kyrgyz Republic, which requires governments at the local and national levels to make budget documents available to the public. In addition, article 12 of that law stresses that the parliament, village, district, and city councils openly and publicly review and adopt the national and local budgets. By the end of the 1990s Kyrgyzstan, with the help of international donors, started conducting public budget hearings in rural and urban municipalities. Today almost all urban, and many rural, municipalities in the country conduct annual budget hearings. 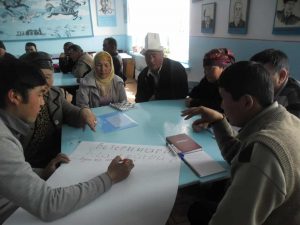 But, as in many countries, the existence of laws providing access to budget information does not guarantee that this access exists in practice. In 2009 the Open Society Institute evaluated access to public finance information in several countries. The study found that Kyrgyzstan had laws enabling citizens to demand budget information from state authorities but they were not widely used due to a lack of awareness among citizens about these legislative tools. Additionally, recent experience has demonstrated that budget hearings alone do not guarantee “authentic participation.” A lack of financial literacy among the population, low levels of interest in budgeting, and a lack of skills among local leaders in moderating budget hearings are some of the documented problems. Most important, there is no oversight mechanism that mandates the government to incorporate citizens’ feedback in final budget decisions. To address these challenges a new approach was undertaken.

In 2012 Shaidan and Aral — two smaller rural municipalities in southern Kyrgyzstan — merged budget hearings with citizen evaluation cards on veterinary, library, education, and cultural services. It was a three-stage interaction process that included focus group interviews with residents, public administrators, and community leaders; evaluation report cards; and open budget hearings. This approach emphasized the engagement of an experienced local community organization with residents before and after the budget hearing. The local governments in both Shaidan and Aral reported a high number of participants and active discussions during the hearings. The experience of Shaidan and Aral demonstrated that using multiple tools to engage residents in budgeting processes can be very successful, especially when combined with large-scale preparation of residents prior to the budget hearing. Presenting both citizen-generated evaluations of government services and government-generated budget information at the hearing allowed citizens and administrators to compare and contrast their perceptions of the cost effectiveness of various local services. Direct interaction between residents and department administrators created a sense of empowerment among the residents, as questions were answered in a timely manner by the administrators.

Public administrators in Kyrgyzstan are enthusiastic about citizen budget engagement and the success of the exercises in Shaidan and Aral. Budget transparency and participation is particularly useful for poorer municipalities as administrators are able to better focus limited resources on more urgent projects with direct input from residents about priorities and needs. Furthermore, as we’ve seen in other countries citizen engagement also helped to improve the local tax collection in poor municipalities because residents began understanding financial difficulties faced by municipalities and were willing to contribute and be involved. Finally, best practices, such as in Shaidan and Aral, are being promoted to other villages though invitations of villagers and administrators from other areas to observe the conduct of successful budget involvement. It is also reported that in 2011, over 140 rural municipalities (out of 459) have been exposed to trainings related to various forms of citizen engagement in budget decision making.