Kasih, 72, lives alone in the alleys of Jakarta, supporting herself by cleaning other people’s homes. That is, until COVID-19 hit. With social-distancing requirements in place, she saw her meager business dry up. Despite a government social-protection program (called Family Hope) that offered conditional cash payments for people like her, she received nothing.

Then a community volunteer trained by IBP partner SPRI (Indonesian People’s Struggle) checked in on her neighborhood and discovered her situation. The volunteer photographed the conditions of the woman’s home and sent the documentation to the neighborhood leader—who merely said, “she’s not on my list.” So, SPRI went higher, to the village leader. This process went back and forth for a bit, but in the end, the organization was successful.

“Not only did the elderly woman receive the aid she needed, but also her neighbors, around 15 of them,” says Dika Muhammad, general secretary of SPRI. “It takes persistence.”

The mission of SPRI is to do just that: assure that eligible individuals and families get the social protection benefits they deserve, such as health care, food, education and a basic income. COVID-19 has made that more essential, and even more of a challenge.

The Indonesian government issued social-distancing orders March 16 and since then, the pandemic has spread to almost all provinces, with Jakarta the most affected (nearly 50% of the 24,538 confirmed cases at the time of this writing, including 1,496 deaths). SPRI typically works by organizing mass mobilizations and focus groups with policymakers. In addition, members had just completed IBP’s training on how to conduct a community social audit using an approach supported by Perkumpulan Inisiatif. But since such intensive outreach is now no longer possible, IBP is helping the organization pursue its mission in other ways.

For example, SPRI conducted an online survey of about 4,000 people from urban poor families in 36 Jakarta villages to determine who is not receiving the benefits but should be, as well as the socioeconomic impact of COVID-19. As a follow-up, SPRI is monitoring implementation of the government social-assistance programs. The results of the survey and monitoring will be displayed on a visual “needs map,” then sent to policymakers at the provincial and national levels to reform the social-assistance programs. 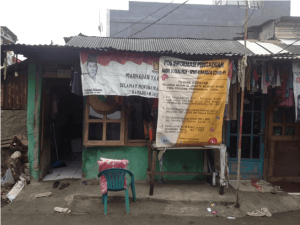 For those who don’t have internet, SPRI uses WhatsApp groups and paper forms that can be completed at a new Community Information and Complaint Center. Staffed by SPRI members and volunteers who have been trained as social auditors, the center educates those who could benefit from Family Hope and documents complaints from those who are not getting the assistance they need. The auditors also are being trained in citizen journalism so they can effectively tell the stories of COVID’s socioeconomic impact in their communities.

“The government data is not very complete or even credible, so many eligible poor people who should get help do not get it,” explains Mulyanah, a community center manager in Kramat Jati. “That’s why SPRI fights for this community. We don’t just focus on basic income, but also health care and education.”

For example, SPRI works in 36 urban villages in Jakarta. Before COVID, it had identified about 2,000 families needing assistance who were not receiving it. After the pandemic hit and the economic fallout became apparent, the online survey showed that 78.8% of urban poor residents had worked in the informal sector and now had minimal if any income. Even among those who previously had formal jobs, 62% now were unemployed. Overall, more than 91% had no cash assets at all. 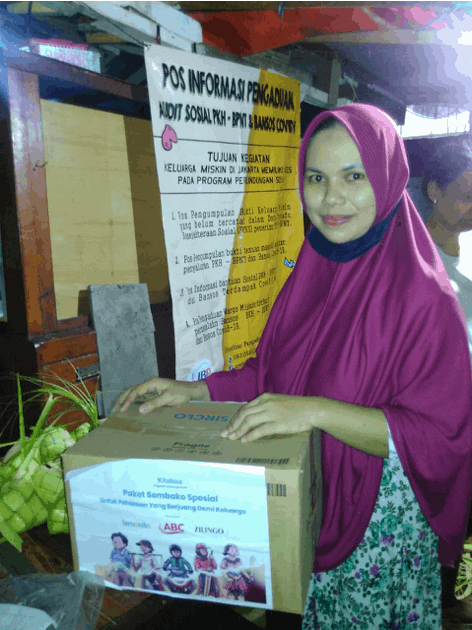 “After COVID, the government slightly increased the amount given to recipient families, depending on the number of children,” says Tri, a community auditor in Duri Kepa. “But it’s still not much—maybe around 250,000 rupiah (US$10) per month for a family with one child.”

In addition to cash transfers, these families also should receive nine food staples, such as rice. However even if households receive the food, it is often contaminated with insects. Likewise, the food delivered is supposed to cover one month but may be sufficient for only a week.

Another issue is the promised level of cash support vs. reality: For example, the government has said in the media that an average family of five would get 600,000 rupiah, but when it’s delivered, it’s maybe around 300,000—half what was promised. Or, sometimes families learn that the amount delivered must be shared with other households.

“Before SPRI established the complaint center, these families didn’t know to whom or how to report the problems,” explains Suryati, a community center manager in Tomang. “The government didn’t provide a channel for reporting or complaints. Now, they have someplace to go. They know that SPRI will take several steps to follow up on their complaints, including going to the appropriate line agency. We are their advocate.”