Twelve years of transparency: How EITI implementing countries are progressing in the Open Budget Survey

Resource-dependent countries face many obstacles in adhering to principles of good extractives governance, including corruption and mismanagement. Enhanced fiscal transparency is vital for addressing these challenges. It is a goal shared by the Extractive Industries Transparency Initiative (EITI) and the International Budget Partnership (IBP).

The EITI is serious about measuring its impact. IBP’s Open Budget Survey (OBS) is a source of data on key dimensions of fiscal accountability, such as fiscal transparency, public participation and oversight by legislatures and independent audit institutions. Of the 77 countries surveyed in the OBS since 2008, 30 are EITI members with comparable data across all years during which the OBS was conducted.

What does the latest Open Budget Survey reveal? 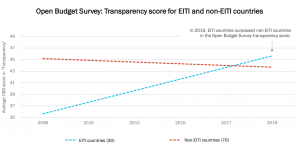 In fact, EITI implementing countries have been a driving force behind the improvement in overall fiscal transparency scores for the 77 countries covered by the OBS. This group has shown sustained improvements of almost two points in each round of the OBS, while others in the index have seen stable or decreasing scores.

Corresponding time-series data for the “Participation” and “Oversight” categories are not yet available. But a comparison of 2019 results illustrates a slightly higher average for EITI countries, both for public participation in the budget process as well as audit and legislative oversight. While these initial findings are encouraging, we need to await future iterations of the OBS to determine whether the correlation between EITI implementation and high OBS scores is maintained.

Looking behind the data

There is no single factor that can explain why EITI implementing countries have made such good progress in the OBS, and there are also variations in performance within the group.

However, 16 EITI implementing countries[1] stand out in OBS 2019 and some general trends exist in their governance of extractives. The Dominican Republic and Mongolia have developed extractive transparency portals, which provide additional disclosures where previously there were none. In Kyrgyz Republic and Indonesia, such systems already existed, but have been opened up to the public. Afghanistan and Senegal transitioned from more manual and paper-based ledgers to interoperable government systems that share information. Governments are already opening up these new systems, as confidence in the reliability of data grows.

An emphasis on better record-keeping for public scrutiny, effective audit procedures and public oversight to track gains from extractives revenues in budget documents may also have contributed to the improvements shown in the data.

It will be interesting to see how the scores of EITI countries under the “Public Participation” category of the OBS develop. Improvements would be a welcome counterpoint to concerns about the erosion of civic space, including in countries implementing the EITI. Public participation in the budget process is fostered both through EITI’s multi-stakeholder platforms and through IBP’s emphasis on improving access to budget information and creating platforms for public engagement and feedback.

Why do the findings matter?

Open budget data has additional value in shaping the availability of investor finance for governments and companies. This will be critical as resource dependent countries seek to build back their economies. Analysts seeking out data to inform investment decisions are increasingly prioritising environmental, social and governance (ESG) considerations as they respond to public pressure for responsible investment. Their needs can only be met if budgets and government data are available in open format, and if evidence of improved budget transparency through the OBS is more readily available to investors.

The EITI standard and the OBS produce transparency scores that can inform governance dimensions of sovereign credit ratings’ governance, while the focus on public participation also improves companies’ and investors’ social license to operate. Both deserve more attention in the investor world.

In demonstrating a steady improvement in budget transparency in EITI countries – albeit with significant variation between countries – the OBS findings offer some comfort to proponents of extractives transparency.

In light of the triple crisis that resource-dependent countries face as a result of the Covid-19 pandemic, they assume greater significance. The crisis could have an adverse effect on the hard-won transparency gains evidenced by 12 years of OBS data, as governments divert resources to public health priorities and away from extractives transparency reforms. Protecting these gains and presenting evidence on progress in EITI countries can shore up support for governance reforms in the extractives sector at this challenging time.

The authors are grateful to Christoffer Claussen and Vivek Ramkumar for their advice and input on this blog post.

Warren Krafchik is the Executive Director of the International Budget Partnership (IBP), where for 20 years he has led IBP’s work to support and collaborate with civil society organizations in Africa, Latin America and Asia to ensure governments are held accountable as stewards of public resources. IBP works with independent organizations in over 120 countries by providing financial assistance, training and technical support and designing collaborative research and networking programs.

In addition to directing IBP, Krafchik is a co-founder and steering committee member of the Global Initiative for Fiscal Transparency, and he was a founding co-chair of the Open Government Partnership.

Krafchik joined the IBP in 2001 after nine years at the Institute for Democracy in South Africa (Idasa), where he founded the Budget Information Service (BIS). Idasa’s BIS was one of the first organizations in developing countries to pioneer a role for civil society organizations in budget processes, and its work and methods have been adapted by civil society and governments around the world. Krafchik serves on the board of the Natural Resource Governance Institute and was a founding board member of the Impumelelo Innovations Program and Topsy AIDS Foundation.

Krafchik is the author of numerous publications and a frequent speaker on fiscal processes, equity and accountability. He received a Masters in Economics from the University of Cape Town.