The Road to Budget Transparency: Four Things Governments Can Do

Imagine you’re a politician or senior official in a developing country, and you are part of a recently elected reform-oriented government that has come to power. Your party has promised, as part of a broader set of public sector reforms, to put more budget information in the public domain so that citizens can more effectively participate in decisions about what happens to public resources — and monitor how those decisions are carried out on the ground. So, what can your new government do to turn its commitment to open and accountable budgeting into reality? And which country examples might serve as inspiration?

First, you need to know where you’re starting from. Every two years since 2006, the International Budget Partnership conducts the Open Budget Survey, the only independent, comparable, and regular assessment of government budget transparency, public participation, and formal oversight in over 100 countries around the world. From a subset of survey questions on the amount and timeliness of budget information that governments make publicly available, each country surveyed earns a score between 0 and 100 on the Open Budget Index (OBI), that can be compared across countries and over time. According to OBS data, past governments in your country were not completely opaque, but over time they have not managed to substantially increase the country’s OBI score.

Looking at OBI data tells us that quite a few countries face a similar situation: they manage to increase their levels of budget transparency from a low base, but then get stuck in the middle ranks of the OBI, without ever reaching a score of 61 or higher. IBP has argued in a previous paper that 61 is the threshold above which governments can be considered to be publishing sufficient information to enable public accountability. Why are countries getting stuck? And what does it take for a government to manage to break through that barrier? 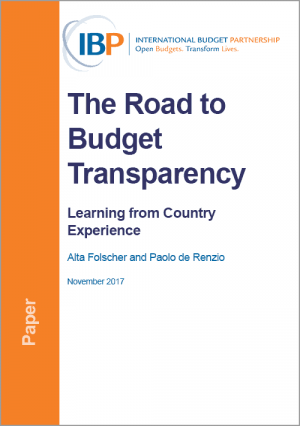 Download The Road to Budget Transparency: Learning from Country Experience »

In a recent comparative study carried out in collaboration with country-based researchers, we looked at three countries — Mexico, the Philippines, and Uganda — that managed to push their OBI score above 60 and compared them to another three — Argentina, Ghana, and Indonesia — that, despite improving, did not. The study highlights four specific initiatives that successful governments took to reach higher levels of budget transparency:

Of course, these initiatives and their positive impact on budget transparency depended on a host of contextual factors, for example, those linked to levels of political commitment to reform and of technical capacity to implement them. In the case of successful governments, they also relied on the presence of reform champions, who were key in building momentum for the reforms and overcoming resistance to them. Regardless of whether some or all these factors are present, governments interested in improving their levels of budget transparency could certainly do worse than try and follow these countries’ example.

The findings of this study are particularly relevant as we get closer to the global release of the Open Budget Survey 2017 results – planned for the end of January 2018. It will be interesting to see how many other countries in this latest round of the survey will have managed to achieve satisfactory levels of budget transparency, earning OBI scores of 61 and higher, and to test the extent to which the lessons from past reformer governments can be useful to pave the road for future budget transparency improvements.

Be one of the first to know about the Open Budget Survey 2017 results! Click here to subscribe to email updates from the International Budget Partnership.